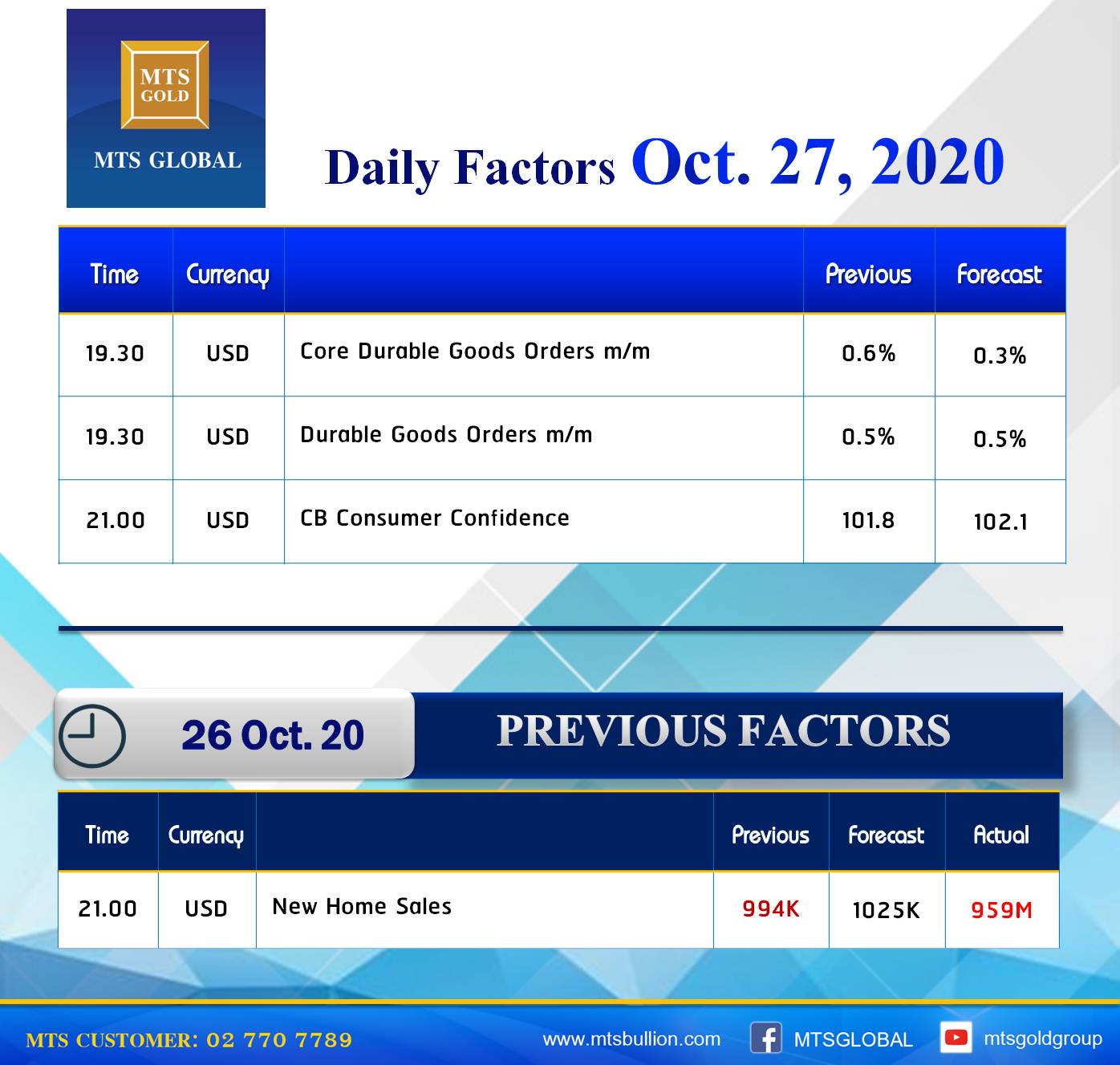 · Gold prices were steady on Monday as investors worried about a spike in COVID-19 cases and the race for next month’s U.S. presidential election faced a stronger dollar.

· “Gold has been trapped between $1,930 - $1,880. It is waiting to take cues from the election and there’s this resurgence of the pandemic,” said Phillip Streible, chief market strategist at Blue Line Futures in Chicago. “But the dollar index is up today, (and) has a strong inverse correlation to gold,” he added.

· A spike in new infections weighed on risk sentiment among investors as cases touched record levels in the United States. In Europe, Italy and Spain imposed new restrictions.

· On Sunday, U.S. House of Representatives Speaker Nancy Pelosi said President Donald Trump’s administration was reviewing the latest plan for more COVID-19 relief, and she expected a response on Monday.

· “Overall bullish sentiment remains strong and deep, with a view that more stimulus will be coming and that it is really only a matter of time,” said Tai Wong, head of base and precious metals derivatives trading at BMO.

“As a result we continue to see demand for gold on dips.”

· Gold tends to benefit from widespread stimulus measures from central banks because it is widely viewed as a hedge against inflation and currency debasement.

However, safe-haven gains for the U.S. dollar limited gold’s appeal, as the dollar index rose 0.3% against its rivals, making gold more expensive for holders of other currencies.

U.S. House of Representatives Speaker Nancy Pelosi is hopeful that congressional Democrats and the Trump administration can reach agreement on a coronavirus relief bill before the Nov. 3 elections, her spokesman said on Monday, adding that major issues still must be ironed out.

House Speaker Nancy Pelosi said on Monday the White House has refused to sign on to Democratic lawmakers’ plan for a coronavirus testing strategy, despite earlier public statements to the contrary by Treasury Secretary Steve Mnuchin.

“Today, we are waiting for an important response on several concerns, including on action to crush the virus,” Pelosi said in a letter to colleagues. “Ten days after Secretary Mnuchin went on CNBC to declare that he was accepting our testing plan, the Administration still refuses to do so.”

The drop in new homes, however, likely signals a slowdown in housing market momentum heading into the fourth quarter. New home sales are counted at the signing of a contract, making them a leading housing market indicator.

New home sales fell 3.5% to a seasonally adjusted annual rate of 959,000 units last month. August’s sales pace was revised down to 994,000 units from the previously reported 1.011 million units. Economists polled by Reuters had forecast new home sales, which account for about 12.8% of housing market sales, rising 2.8% to a rate of 1.025 million units.

AstraZeneca, which is developing its potential Covid-19 vaccine in collaboration with the University of Oxford, said adverse responses to the vaccine among the elderly were also found to be lower.

The announcement is likely to boost hopes of a Covid vaccine being developed before the end of the year.

“It is encouraging to see immunogenicity responses were similar between older and younger adults and that reactogenicity was lower in older adults, where the COVID-19 disease severity is higher,” an AstraZeneca spokesman told CNBC via email.

Hopes are rising that a Covid-19 vaccine could be approved by the end of the year, with drugmakers and research centers scrambling to help bring an end to the pandemic.

Dozens of candidate vaccines are in clinical evaluation, according to the World Health Organization, with some already conducting late-stage tests before seeking formal approval.

The outcome of the trials is being closely monitored around the world.

“We will know whether a vaccine is safe and effective by the end of November, the beginning of December,” White House coronavirus advisor Dr. Anthony Fauci said in a BBC interview on Sunday.

· Wave of new COVID-19 cases crashes across U.S. and Europe as winter looms

The United States, Russia, France and many other countries are setting records for coronavirus infections as a tidal wave of cases washes over parts of the Northern Hemisphere, forcing some countries to impose new curbs.

The gloom weighed on global financial markets on Monday as surging infections clouded the economic outlook.

U.S. stocks had their worst day in four weeks over the double whammy of record coronavirus cases and political deadlock in negotiations to provide more economic aid.

But British Health Secretary Matt Hancock cautioned that the vaccine would not be widely available until next year and said, “We’re not there yet”. 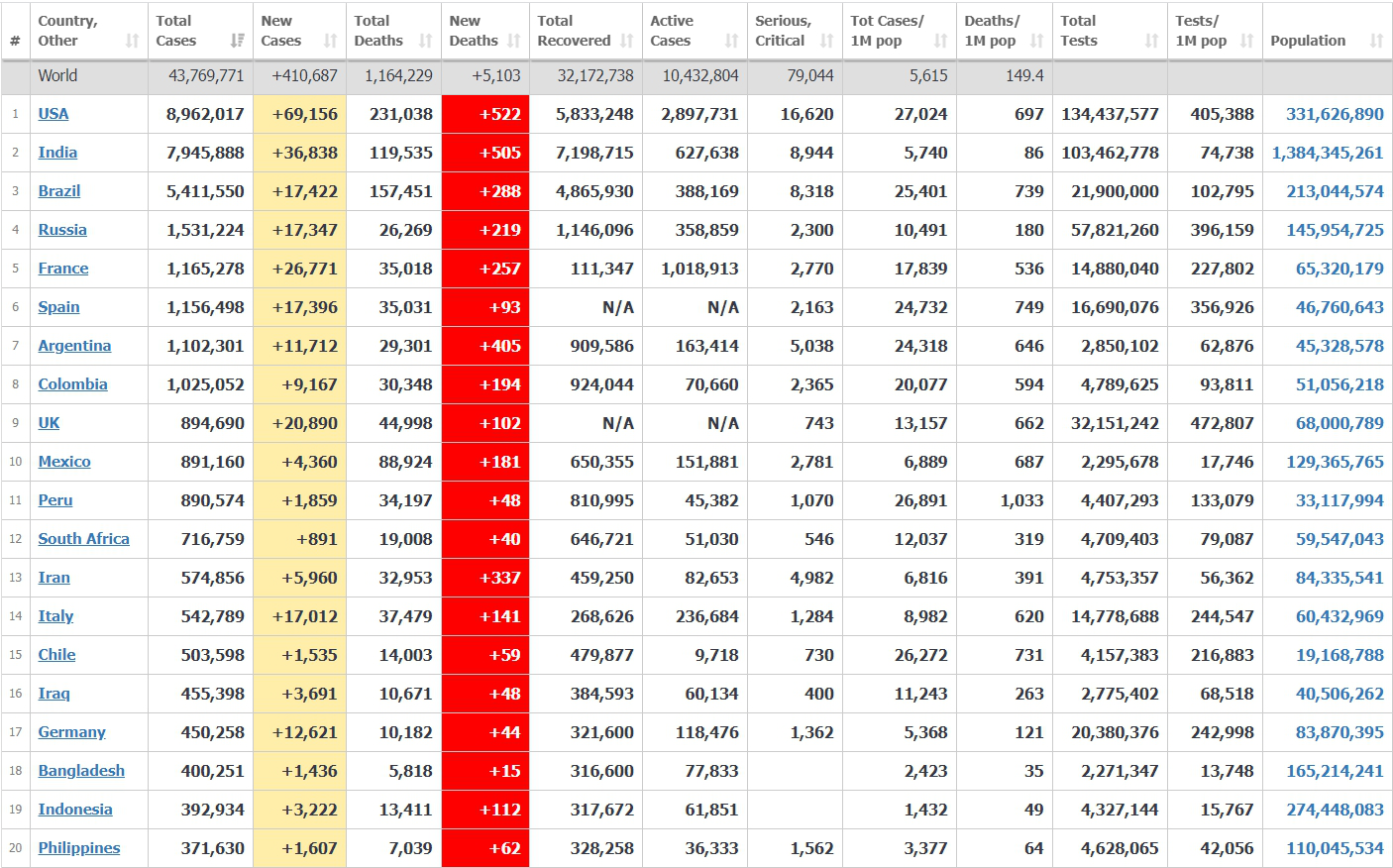 The average number of new daily cases of coronavirus in the United States is at a record — stressing local hospital systems and forcing new curfews and other restrictions in some parts of the country.

With fall holidays such as Halloween and Thanksgiving approaching, the U.S. has now established its third peak of daily new cases with no signs of letting up.

India will sign a military agreement with the United States for sharing of sensitive satellite data, the defence ministry said on Monday, as the two sides began a top-level security dialogue aimed at countering China’s growing power in the region.

China’s foreign ministry has ordered six U.S. media outlets to report back on their operations in the country within seven days, after Washington said it was designating the U.S. arms of six more China-based media firms as foreign missions.

The U.S. media firms affected are the American Broadcasting Corporation (ABC), the Los Angeles Times, Newsweek, Feature Story News, the Bureau of National Affairs and Minnesota Public Radio, according to a statement from China’s Ministry of Foreign Affairs late on Monday.

Germany is continuing to look into the behaviour of Thailand’s king, who tends to spend long stretches of time in Bavaria, German Foreign Minister Heiko Maas said on Monday, as opposition protests in Thailand gain speed.

“We are monitoring this long-term,” Maas said. “It will have immediate consequences if there are things that we assess to be illegal.”

Factory workers chanted slogans, students and pensioners took to the streets, and police detained at least 235 people on Monday as the Belarusian opposition sought to intensify pressure on veteran leader Alexander Lukashenko with a nationwide strike.