· Gold prices eased to an over one-week low on Monday in early Asia trade as the dollar firmed and talks over the new U.S. coronavirus aid package showed no signs of progress.

· The dollar index was up 0.1% against a basket of currencies.

· U.S. House Speaker Nancy Pelosi said on Sunday the Trump administration was reviewing the latest plan for more COVID-19 relief over the weekend and that she expected a response on Monday, adding that she was still optimistic a deal could be reached.

· U.S. reported 79,852 new infections on Saturday, close to the previous day’s record of 84,244 new cases. Hospitalizations are also rising and have hit a two-month high and deaths are trending upwards, according to a Reuters tally.

· France registered record increase in infections over the weekend, while Spain announced a state of emergency as a second wave of cases surges through Europe.

· Gold premiums in India jumped to their highest in nearly three months last week, as jewellers continued to stock up on hopes of more customers visiting stores as the festive season gathers pace.

· Speculators increased their net long position by 15,488 contracts to 135,311 in week to Oct. 20 in COMEX gold, the U.S. Commodity Futures Trading Commission (CFTC) said on Friday. 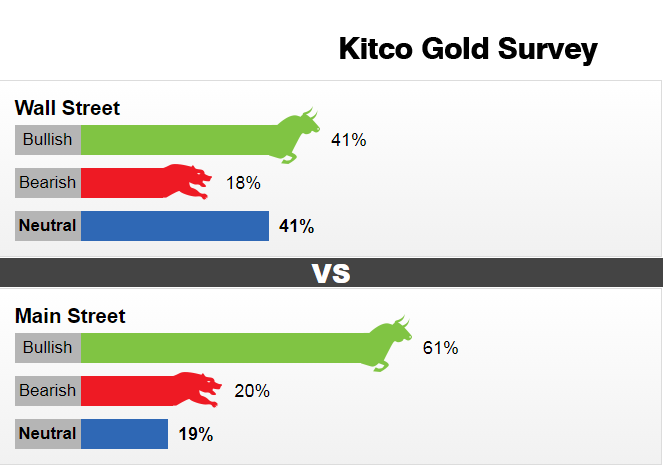 Investors should not expect to see the gold market to get anywhere in a hurry as prices continue to consolidate around $1,900 in the near-term, according to the latest Kitco News Weekly Gold Survey.

The gold market continues to struggle for direction as sentiment among market analysts is decidedly mixed; meanwhile retail investors remain extremely bullish on gold next week; however, interest in the market remains at lows levels not seen since the start of the year.

While some analysts are bullish on gold in the near-term, they don't see any major breakout on the horizon until there is more clarity surrounding the on-off negations between Democrats and Republicans for further stimulus measures to support economic growth.

Most analysts are neutral to bullish on gold, there are other analysts who see lower prices in the near-term, especially after gold was unable to break its near-term resistance levels earlier this past week.

* Christopher Vecchio, senior currency strategist of I.G. Group, said that at this point, it is unlikely any new stimulus package will be announced before Nov. 3. And this will keep markets range-bound in the near-term.

* Richard Baker, editor of the Eureka Miner's Report, said that he is bullish on gold next week but sees prices capped around $1,920 an ounce.

"Lacking a late-October surprise, it is challenging to imagine a market driver that will move the lustrous metal from its resilient meanderings of late until post-election," he said.

However, looking past the next two weeks, Baker said that he still sees prices pushing to $2,200 by year-end.

* Nicholas Frappell, global general manager ABC bullion, said that he could see gold prices test support around $1,888 in the near-term. "I think the USD will tend to be rather more bid in the few days just before the U.S. election," he said.