· Gold prices fell on Thursday as the dollar climbed after the U.S. Federal Reserve painted a favorable economic recovery picture but stopped short of offering concrete signals on further stimulus.

· “Investors across the Asia-Pacific are perhaps not inspired by last night’s FOMC (Federal Open Market Committee) meeting, in which the central bank seems to be reluctant to add stimulus in view of improving fundamentals,” said Margaret Yang, a strategist with DailyFx, which covers currency, commodity and index trading.

· “This led to a stronger U.S. dollar, and a weaker gold price,” she added.

· The dollar index rose to a more than one-week high against its rivals after the Fed signaled on Wednesday it expected the U.S. economic recovery from the coronavirus crisis to accelerate, with unemployment falling faster than the central bank’s forecast in June.

· Meanwhile, the Bank of Japan kept monetary policy steady and slightly upgraded its view on the economy, suggesting that no immediate expansion of stimulus was needed to combat the coronavirus pandemic.

· Offering gold some support, the Fed pledged to keep rates pinned near zero levels until inflation was on track to “moderately exceed” its 2% inflation target “for some time.”

· Lower interest rates decrease the opportunity cost of holding non-yielding bullion. Gold is also used as a hedge against inflation.

· Gold Price Analysis: XAU/USD drops the most in two weeks inside monthly triangle

Gold prices lose 1.0% while declining to $1,939.70, intraday low of $1,97.80, during the pre-European session on Thursday. The yellow metal’s declines marks its U-turn from the upper line of a short-term symmetrical triangle formation established since August 12.

With the consolidation in gold prices joining bearish MACD, sellers cheer a downside break of 1-day EMA, which in turn directs the quote towards the triangle’s support, at $1,920.80 now. 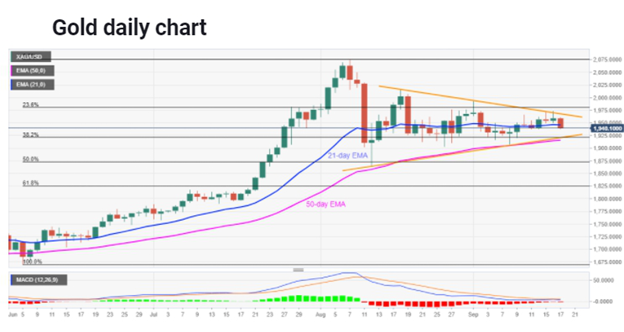 It should, however, be noted that the bullion’s further weakness will depend upon how long it stays below the 50-day EMA level of $1,915.81.

On the upside, gold buyers’ ability to regain 21-day EMA support, currently around $1,945.85, will direct the moves towards the triangle’s resistance line near $1,968.

In a case where the bulls manage to cross $1,968 on a daily closing basis, the monthly top around $1,992 and the $2,000 psychological magnet will be their next choice.