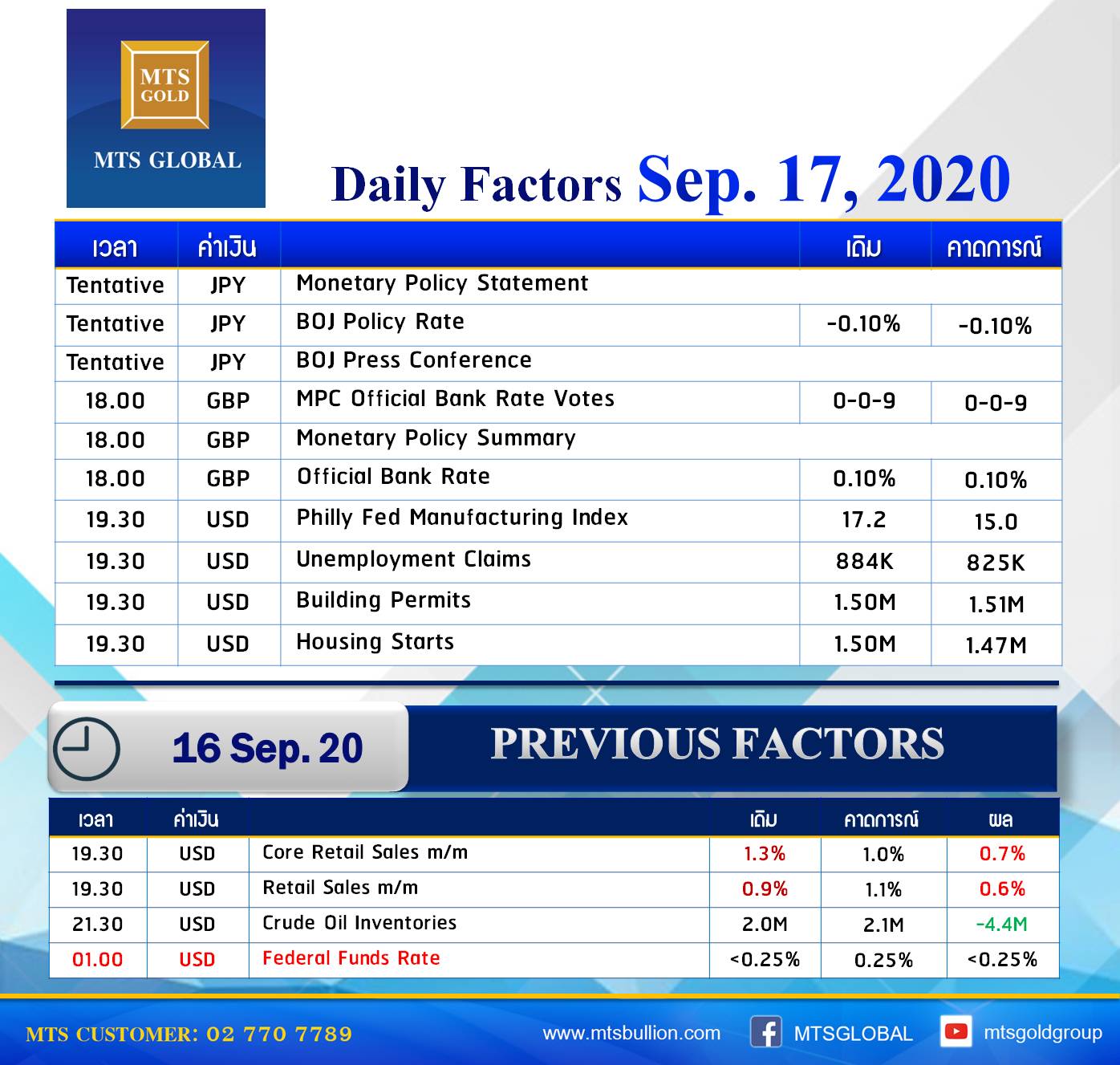 · Gold rose on Wednesday in the run-up to a U.S. Federal Reserve policy decision, which is expected to reiterate a dovish monetary policy stance to support the economy's recovery from the coronavirus crisis.

· "The expectations are that the Fed is going to leave the interest rates low for a very extended period of time, and inflation numbers to run over their 2% target rate," said David Meger, director of metals trading at High Ridge Futures.

"The weaker economic data supports the idea that the Fed will remain accommodative, that there will be another stimulus put in place by the U.S. Congress; these are the main pillars of support for gold," Meger said.

· The Fed policy decision is due at 2 p.m. EDT (1800 GMT). The meeting is its first since the central bank took a more relaxed stance on inflation last month. The announcement will be followed by a news conference by Fed Chair Jerome Powell.

· Meanwhile, U.S. consumer spending slowed in August, pointing to a stall in the economic recovery from effects of the coronavirus.

· Lower interest rates tend to weigh on bond yields and the dollar, bolstering the appeal of non-yielding gold.

· "The precious metals market awaits the latest hurdle for a refreshed rally to be removed," TD Securities said in a note.

"Officials are set to send a dovish signal through the wording on QE (Quantitative Easing), the extension of the dot plot through 2023, and the Chairman's press conference."

The Fed does not expect to see inflation pick up for years, and it is willing to keep rates at zero even after it does.

- Fed Chairman Jerome Powell called the Fed’s forward guidance on interest rates “powerful,” and the markets read it as dovish.

- The Fed forecast it would keep interest rates at zero through 2023, and at the same time it does not see inflation rising to its 2% target until 2023.

- Stocks initially rallied on the guidance before giving up gains, and bond yields rose as Powell did not promise any increase in Treasury purchases, as some expected.

Stocks initially surged after the Fed released its post-meeting statement and its latest economic forecast, showing it will keep interest rates at zero at least through 2023, as expected. Stocks gave up their gains as Fed Chairman Jerome Powell briefed the media, and described the Fed’s guidance as strong and “powerful.”

Treasury yields moved slightly higher after Powell said the Fed plans to keep its asset purchases at current levels for now. Some bond market pros have been expecting the Fed to increase Treasury purchases, and Powell did not commit to that. The 10-year Treasury yield rose to 0.695%.

Democratic presidential candidate Joe Biden on Wednesday rejected President Donald Trump’s charge that he is spreading fear about the safety of a potential coronavirus vaccine, urging Trump to defer to scientists and not rush its rollout.

President Donald Trump urged his fellow Republicans on Wednesday to go for “much higher numbers” in a coronavirus aid bill, as Washington remained deadlocked over economic relief from the crisis ahead of the Nov. 3elections.

“Go for the much higher numbers, Republicans, it all comes back to the USA anyway (one way or another!)” Trump wrote on Twitter Wednesday. Later in the day he spoke favorably about a proposal for $1.5 trillion in aid made by a bipartisan group of centrist lawmakers.

Senate Republicans, whose last coronavirus aid offer was $300 billion and some of whom would prefer doing nothing more, reacted cautiously to Trump.

But Democrats Nancy Pelosi, the Speaker of the House of Representatives, and Chuck Schumer, the Senate Minority Leader, said in a joint statement they were encouraged and hoped White House negotiators would now “meet us halfway.”

U.S. President Donald Trump said on Wednesday he was not ready to sign off on a proposed deal involving Oracle Corp ORCL.N and ByteDance's TikTok and that he would receive a report on it on Thursday.

Trump, at a news conference, said he was told there was no legal path to ensure money from the TikTok deal goes to the U.S. government. Under ByteDance’s proposal, the Beijing-based company would keep a majority stake in TikTok’s global business and create headquarters for TikTok in the United States.

The Trump administration is considering at least $300 million in cash aid to U.S. oil refiners that are denied exemptions to U.S. biofuel blending laws for the 2019 compliance year, two sources familiar with the matter said.

U.S. President Donald Trump on Wednesday continued to rail against widespread mailing out of ballots, saying governors of Democratic-controlled states posed a bigger threat to the Nov. 3 presidential election than any foreign countries.

The Republican president, who is trailing Democratic candidate Joe Biden in national polls, said some results in states that widely mailed out unsolicited ballots were off by 5% to as much as 40%, and such ballots could also be stolen.

· Bank of England gears up for next stimulus push

The Bank of England is expected to signal on Thursday that it is getting ready to pump yet more stimulus into Britain’s economy as it heads for a jump in unemployment and a possible Brexit shock.

The BoE has already cut interest rates to a record low 0.1% and ramped up its bond-buying programme to almost $1 trillion to soften the impact of the coronavirus shock.

The Bank of Japan is set to keep monetary policy steady on Thursday and stress its readiness to work closely with the new government led by Yoshihide Suga, who has vowed to do whatever it takes to ease the economic blow from the coronavirus.

The BOJ board may also debate how the Federal Reserve’s recent shift towards a policy focusing more on jobs, which heightens the chance U.S. interest rates will stay low for a prolonged period, could affect markets.

In a meeting concluding a day after Wednesday’s parliament vote officially electing Suga as Japan’s new leader, the BOJ is set to maintain its ultra-easy policy and offer a slightly more upbeat view on the economy than in July.

Markets are focusing on what BOJ Governor Haruhiko Kuroda would say at his post-meeting briefing on how the central bank could work with the new government to underpin the economy with its dwindling policy tool-kit.

New Zealand fell into its deepest economic slump on record in the second quarter as its battle against the coronavirus pandemic paralysed business activity, official data showed on Thursday.

Gross domestic product contracted a seasonally adjusted 12.2% quarter-on-quarter, its sharpest quarterly contraction on record and largely in line with forecasts of a 12.8% decline from economists polled by Reuters. GDP fell 12.4% year-on-year.

The Reserve Bank of New Zealand had forecast a quarterly and annual GDP decline of 14% in its August statement.