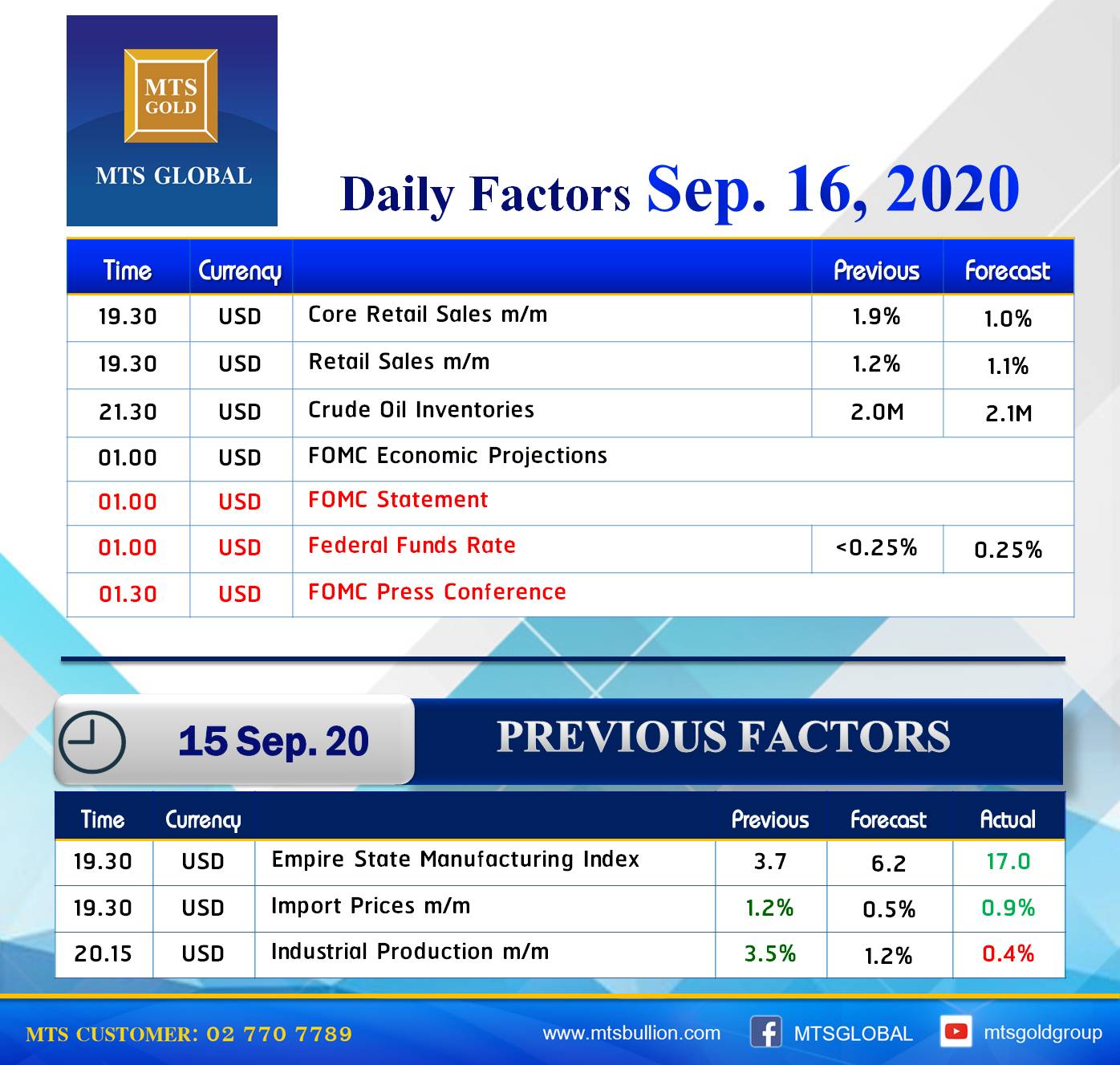 Gold eases as dollar recovers; all eyes on Fed meeting

· Gold edged lower from a near-two week high on Tuesday as the dollar rose, although hopes for a dovish monetary policy stance from the U.S. Federal Reserve limited the safe-haven metals’ losses.

· “The dollar bounced off the lows and we’re seeing some sell-off in gold, but this is temporary, dovish comments from the Fed meeting and a further explanation on their new inflation targets could push gold above $2,000,” said Bob Haberkorn, senior market strategist at RJO Futures.

· Investors are now awaiting a statement from the Fed’s two-day policy event, which ends on Wednesday.

· “There is more optimism because investors are thinking the low interest rates we have can continue for the next three-plus years; that’s very bullish for gold,” said Michael Matousek, head trader at U.S. Global Investors.

· Meanwhile, a group of Democratic and Republican members of U.S. Congress unveiled a $1.5 trillion bipartisan coronavirus relief legislation, which they hoped would break a deadlock.

· Unprecedented monetary stimulus and a low interest rate environment have led bullion to gain 29% this year, as it is seen as a hedge against inflation and currency debasement.

Platinum could outperform gold by about 10%, if the World Platinum Investment Council’s forecasts for a supply deficit come to pass and the gold-to-platinum ratio breaks out of the 2.02-2.20 range, said Saxo Bank analyst Ole Hansen.

In a general sense, the tone from the meeting is expected to be one of caution, even as FOMC members are likely to have to upgrade, at least slightly, their previously downbeat economic forecasts.

- “Clearly, the unemployment rate has moved down dramatically, and the Fed is going to have to recognize that,” said Steven Ricchiuto, U.S. chief economist at Mizuho Securities. “The Fed could talk with more confidence, but they have to make it clear that we’re not out of the woods.”

But the current unemployment rate of 8.4% is already below the committee’s most recent median 2020 forecast of 9.3%. Members also projected a GDP decline of 6.5% that could be in some jeopardy as well, and core inflation was estimated at 1% but most recently was at 1.3%.

- “They’re not ready to announce any big changes now. They’re looking at the economy and they’re probably feeling a little better with the growth picture,” said Ethan Harris, head of global economics research at Bank of America. “The third-quarter bounce looks a little bit better than expected. On the other hand, they’re like everyone else, waiting to see if Washington comes through with a fiscal package.”

- Markets will be looking to see how the committee incorporates the move into its post-meeting statement. The Fed previously had made reference to a “symmetric” target, which meant it would tolerate inflation either somewhat above or below the 2% level.

- Goldman Sachs has a bit different outlook regarding the forecasting aspect.

The bank’s economists expect “large upgrades to the growth and unemployment forecasts in recognition of the surprisingly strong data over the last few months” though they will be “a bit short of the conditions that we expect to eventually trigger liftoff.” Goldman said the recovery “is proceeding at a much quicker pace than past recoveries, in part because of the unusual nature of a shock” in which the economy was shut down abruptly then brought back to life in part through a historically high level of fiscal and monetary policy support.

House Speaker Nancy Pelosi said that she is still opposed to Republican efforts to pass a smaller version of her party’s stimulus plan despite the upcoming 2020 elections.

Bill Gates doesn’t believe any of the coronavirus vaccines in development are likely to seek U.S. approval before the end of October — something that would be bad news for President Donald Trump, who has hinted at a viable vaccine to counter the pandemic before the Nov. 3 election.

“None of the vaccines are likely to seek approval in the U.S. before the end of October,” the billionaire philanthropist told CNBC via video conference last week.

But Gates is more confident about a breakthrough by early next year — and named one drugmaker as being the furthest ahead.

“I do think once you get into, say, December or January, the chances are that at least two or three will (seek approval) — if the effectiveness is there,” the Microsoft co-founder said.

“And so we have these phase three trials that are going on. The only vaccine that if everything went perfectly, might seek the emergency use license by the end of October, would be Pfizer.”

The Centers for Disease Control and Prevention have told U.S. states to be ready for vaccine distribution as early as Nov. 1, in line with Trump’s reported push for a vaccine before the election. But the timing has caused concern among some experts who fear that safety protocols will be sidestepped for political reasons.

For Gates, a pledge from leading vaccine developers gives him confidence that that won’t happen.

A Florida Atlantic University Poll released Tuesday found 49% of likely voters favoring Biden and 46% for Trump, a 3-point difference that amounts to a statistical tie.

A Monmouth University Poll, also released Tuesday, also found a 49% to 46% percent contest, assuming voter turnout is about the same as 2016. If voter turnout is somewhat higher than 2016, the poll found the race would be 50% for Biden and 45% for Trump.

President Donald Trump said on Tuesday he had heard Oracle Corp ORCL.N was very close to a deal over ByteDance's TikTok, even as sources said the Chinese company was seeking to keep majority ownership of the popular short video app.

Approval of Oracle’s deal to become a “trusted technology provider” for ByteDance’s TikTok will be announced on Tuesday afternoon, CNBC’s Jim Cramer reported. A source familiar with the matter later confirmed to CNBC’s Eamon Javers that a decision could come Tuesday.

Oracle confirmed Monday it had struck a deal with the popular video-sharing app’s Chinese parent company. Oracle had been a dark horse in the competition over TikTok, with Microsoft emerging as the first known bidder with Walmart later joining its offer. But ByteDance rejected Microsoft’s bid to buy TikTok’s U.S. assets, Microsoft confirmed Sunday.

Japan’s exports posted a double-digit slump for a sixth straight month in August as U.S.-bound shipments shrank due to a global demand slowdown from the coronavirus pandemic, casting a shadow over a trade-led recovery from the deep recession.

The export decline highlights the immense task Yoshihide Suga, who is assured to be elected prime minister later on Wednesday, faces in driving an economic recovery.

Total exports fell 14.8% year-on-year in August, a smaller decline than the 16.1% expected by economists in a Reuters poll, official data showed on Wednesday.

· India pushes supplies to disputed China border ahead of winter

From deploying mules to large transport aircraft, India’s military has activated its entire logistics network to transport supplies to thousands of troops for a harsh winter along a bitterly disputed Himalayan border with China.

In recent months, one of India’s biggest military logistics exercises in years has brought vast quantities of ammunition, equipment, fuel, winter supplies and food into Ladakh, a region bordering Tibet that India administers as a union territory, officials said.

The move was triggered by a border stand-off with China in the snow deserts of Ladakh that began in May and escalated in June into hand-to-hand combat. Twenty Indian soldiers were killed while China suffered an undisclosed number of casualties.