· Gold prices rose on Monday, supported by a weaker dollar and expectations that the U.S. Federal Reserve will adopt a dovish stance at its two-day monetary policy meeting later this week.

· “The gold market is leaning towards the Fed’s (policy),” said Stephen Innes, chief market strategist at AxiCorp, adding that the U.S. central bank might not change the current narrative, but there is a strong belief in the market that it would be able to trigger inflation.

· The lower interest rate environment and long-term expectations that the Fed is going to increase quantitative easing and weaken the dollar are supporting gold prices, he added.

· The dollar index eased 0.2% against its rivals, with focus on the Fed’s policy announcement on Wednesday. A weaker dollar makes gold less expensive for holders of other currencies.

· Market participants are also waiting for the Bank of Japan and the Bank of England’s policy decisions, due on Thursday.

· Major central banks have rolled out unprecedented stimulus measures and kept interest rates low, driving gold to new highs because of its role as a hedge against inflation and currency debasement.

· “Gold’s bullish longer-term fundamentals have not changed,” Jeffrey Halley, a senior market analyst at OANDA, said in a note. “Gold has well-denoted support between $1,900 and $1,920 an ounce, with trendline resistance at $1,970.”

Rising inflation pressures weighing on negative real yields is creating solid support for gold. Still, the market remains stuck in neutral in the near-term, according to Wall Street analysts in the latest results in the Kitco News weekly gold survey.

“Gold is a little bit dull right now, but we should see some excitement soon,” said Phillip Streible, chief market strategist at Blue Line Futures. “The wedge is getting tighter and is getting closer to a breakout. There is a strong floor in the prices, so we are optimistic that prices will break to the upside.”

“I believe gold needs to do some more work within the established range,” said Ole Hansen, head of commodity strategy at Saxo Bank.

Hansen added that he also doesn’t think gold has seen it lows in this new consolidation period.

Among retail investors, sentiment rose to its highest level in a month. 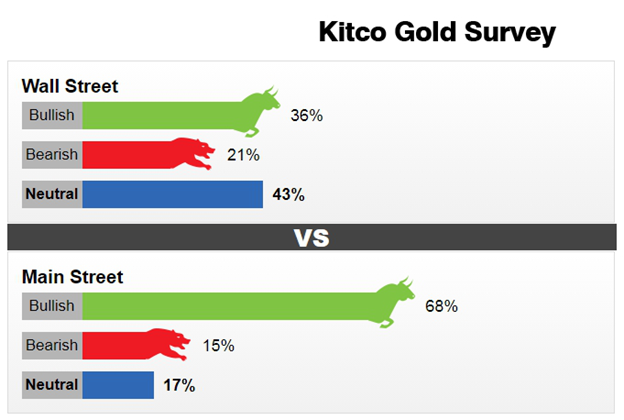 Many analysts said that they are neutral on gold because of renewed momentum in the U.S. dollar. The U.S. dollar index is ending the week above the critical psychological level around 93 points.

Mark Lebovits, publisher of VR Metals/Resource, said that he is bearish on gold because of the recent rally in the U.S. dollar.

Although the bulk of market analysts are neutral on gold, there is still strong bullish sentiment in the marketplace as prices hold support above $1,900 an ounce.

“Gold is being very resilient in resisting a pullback, bouncing off support that has held since the early August drop and the 50-day moving average,” said Adrian Day, president and chief executive officer of Adrian Day Asset Management.

Darin Newsom, president of Darin Newsom Analysis, said that he is bearish on gold because the technical picture is bearish; however, he warned investors: “A market that can’t go down, won’t go down.”

“There is something that is holding the price up and I think it is all the tension and uncertainty in the marketplace,” he said.

Ultimately, he said that he is bearish because he expects the U.S. dollar to eventually push gold below $1,900 an ounce. He added that he is watching gold’s four-week low at $1,874 as critical support.

Charlie Nedoss, senior market strategist with LaSalle Futures Group, said that although technically, gold looks heavy, he is optimistic that prices will rebound next week.

Nedoss said that he would like to see gold prices close the week above $1,954. He added that ultimately the uptrend is still intact as prices trade above $1,941 an ounce.