Having witnessed volatile trades on Thursday, Gold (XAU/USD) settled the day in the red, once again below the $1950 mark. Gold rallied to the highest levels in six days to $1966 after the ECB’s optimistic forecasts and a lack of significant concern on the euro strength push the euro higher and downed the US dollar.  The haven demand for the greenback quickly resurfaced following a sell-off of technology shares on Wall Street, triggering a fresh $20 drop in gold to near $1945 region. A US stimulus bill failure in the Senate also dented the market mood and bolstered the dollar comeback.

Heading into the US Consumer Price Index (CPI) release later on Friday, the dollar clings onto the recovery gains amid mixed Asian equities and higher Treasury yields, exerting the bearish pressure on gold. Disappointing US inflation figures could temper the global market sentiment, boosting the dollar at the expense of the yellow metal. US CPI is seen lower at 0.3% MoM in August while the core CPI figure is expected to drop to 0.2% in the reported month.

Gold failed to deliver a daily closing above falling trendline resistance as well as the critical 21- day Simple Moving Average (DMA), currently at $1947. Thus, the price continues to range within a symmetrical triangle, with the downside more compelling after Thursday’s Doji candlestick. The Doji suggests that the recent buying momentum may have faded.

Meanwhile, the daily Relative Strength Index (RSI) trades flat at the midline, indicating a lack of clear directional bias. A test of the 50-DMA at $1920 cannot be ruled out in the day ahead. 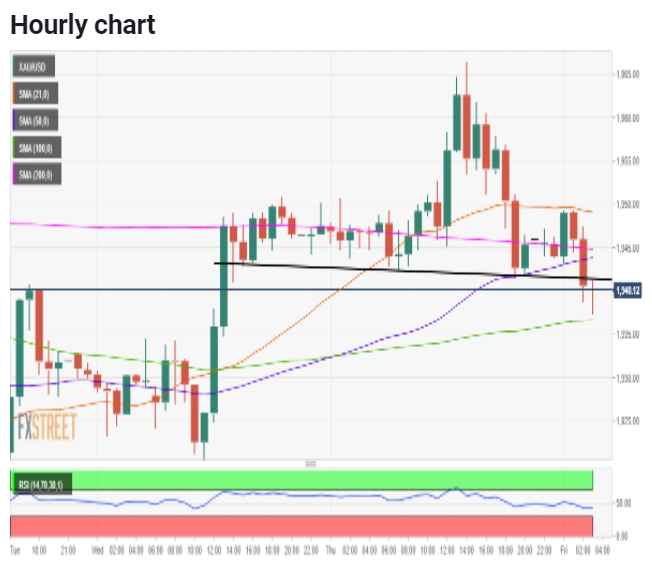 On the hourly chart, the price has spotted a head-and-shoulders breakdown after it closed the hour below the neckline at $1941. The sellers now look to the pattern target at $1919.

Ahead of that the horizontal 100-hourly Simple Moving Average (HMA) at $1936.50 could offer immediate support.

Alternatively, the confluence of the 50 and 200-HMAs at $1944 could cap the immediate pullbacks. Acceptance above the latter could call out for a test of the horizontal 21-HMA at $1949.