· Gold was flat, trading in a narrow $4 range on Friday, as worries over surging coronavirus cases globally and lingering trade tensions between the United States and China overshadowed strong U.S. jobs data.

· “Nagging doubts appear to remain in investors’ minds about the explosion of Covid-19 cases in the U.S. sunbelt states and it’s possible negative effect on the recovery going forward,” said Jeffrey Halley, a senior market analyst at OANDA.

“Geopolitical considerations are also to the fore... with a holiday in the U.S., and the weekend upon us, some haven directed buying of gold is definitely evident.”

· Florida reported more than 10,000 new COVID-19 cases on Thursday, while over 10.76 million people have been infected worldwide.

Gold markets initially fell during the trading session on Thursday in anticipation of the jobs figure in the United States. However, we have seen the market bounce pretty significantly from the $1765 level, which is previous resistance. The fact that we turned around to form a bit of a hammer is a very bullish sign and it suggests that gold will continue to climb higher over the longer term. This should not be a huge surprise; it has been in an uptrend for ages. Beyond that, we have central banks around the world and governments looking to spend even more money, so that should help hard assets such as gold.

At this point, I believe that the market is likely to continue seeing a lot of volatility, but these pullback should continue to be thought of as buying opportunities. Ultimately, gold is trying to build up the necessary momentum to break above the $1800 level, an area that of course has been massive resistance. Once we clear that area, it is likely the gold will continue to go much higher. If and when it does, I suspect that the next target for longer-term traders will be closer to the $2000 region.

It seems as if we are simply dancing around and waiting for some type of decision, but eventually people will either get a not bad news to start buying gold, or the central banks around the world will finally do something to spook people away from fiat currency and back into precious metals. Even if we were to break down a little bit from here, I suspect that the $1750 level will be targeted for support, and most certainly the 50 day EMA will as well. 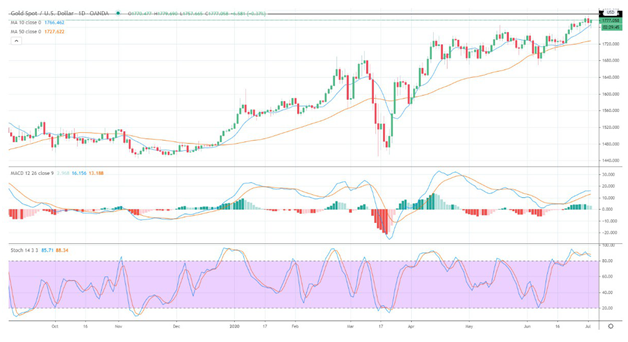 Gold prices consolidated on Thursday. Prices tested support near the 10-day moving average at 1,766 and rebounded. Additional support is seen near the 50-day moving average at 1,727. Resistance is seen near the August 2012 highs at 1,791. Short term momentum has reversed and turned negative after turning positive as the fast stochastic whipsawed and generated a sell signal in overbought territory. The current reading on the fast stochastic is 85, above the overbought trigger level of 80 which could foreshadow a correction. Medium-term momentum remains positive as the MACD (moving average convergence divergence) histogram prints in the black with an upward sloping trajectory which points to higher prices.

· Gold setting up for major summer rally: Watch this level next week - analysts

After touching and then falling back below the $1,800 an ounce level, gold might be gearing up for another significant rally this summer and this is the critical level to watch next week, according to analysts.

Investors were encouraged by a promising early trial of an experimental vaccine from Pfizer Inc. and BioNtech SE, which showed patients producing antibodies against the virus. The U.S. jobs report also beat expectations on Friday with the U.S. economy, adding another 4.8 million jobs and the unemployment rate dropping to 11.1%.

“It will be much slower, harder going from here. With Covid-19 case counts rising again in parts of the country, leading to the delaying/reversing of reopening plans, high-frequency employment data already show a stall in the prior improving trend towards the end of June. And with several industries unable to fully reopen until a vaccine/treatment is ready, progress will remain sluggish even if case counts start to ease again,” Grantham said on Friday.

The risk-on selling pressure in gold was a knee-jerk reaction that is likely to reverse itself as any price dips are continued to be viewed as buying opportunities by gold trader, said TD Securities commodity strategist Ryan McKay.

“Right now, the market is trading gold with a typical playbook where risk appetite is surging and a lot of the market is selling gold in response to that. Not a correct move at the moment since the risk appetite will be bullish for gold. We should see to start inflation breakevens move higher. Real interest rates will continue to move lower in response to inflation, which is extremely bullish for gold,” McKay told Kitco News. “Market participants should embrace risk-on behavior inasmuch as it is driven by improving growth/inflation prospects, which should support gold.”

“Every day we have bad news, whether it is COVID-related or not. Gold is looking at a possibility of approaching $1,800, especially if it can break above $1,790.”

Gold tested $1,800 in August Comex futures this week but was not able to hold that level because of the lack of breaking above $1,790 in spot prices, which brought in profit-taking and eventually stop-losses, said Nabavi.

Gold is back in its trading range with $1,755 acting as good support on the downside and $1,785 as good resistance, he added.

“A lot of the firms have financial year-end in June and yesterday was a brand new happy new year. A lot of people are bullish on precious metals … Everyone is looking for safe haven,” Nabavi said.

“Even though we pulled back at the end of the week on some pretty standard profit-taking behavior. Over the rest of the summer, gold’s price action sets us up to test above $1,800. Towards the end of the month and into August, we will see gold higher,” Millman said.

Next week will be a quiet one from the data-perspective. The week will kick-off with one of the most important releases to watch — the U.S. ISM non-manufacturing PMI from June.

“Potential upside in the data could surprise the gold market with another knee-jerk reaction, which will ultimately be a buying opportunity,” McKay pointed out.

On Friday, investors will also be eyeing the U.S. PPI number from June.