· Gold moved in a narrow range on Wednesday as cautious investors awaited the U.S. Federal Reserve’s decision on interest rates later in the day while weak equities lent support.

· “We seem to be at a bit of an equilibrium around here, stuck between $1,480 and $1,520. If the Fed is more dovish in their outlook, it could be enough to drive gold higher,” said OANDA analyst Jeffrey Halley.

· Investors expect the U.S. central bank to lower interest rates by a quarter of a percentage point for a third time this year, according to CME Group’s FedWatch tool.

However, only about a 30% chance of another cut in December has been priced in, compared with about 70% earlier this month.

· Muted movement in Asian equities on Wednesday also aided gold, with MSCI’s broadest index of Asia-Pacific shares outside Japan down 0.16% from Tuesday’s three-month high on reports that an interim U.S.-China trade agreement might be delayed.

The more than 15-month trade spat between the world’s two largest economies has roiled financial markets around the globe, making them sensitive to the slightest development negotiations.

· “The market is very range-bound with the FOMC (meeting outcome) around the corner,” said Nicholas Frappell, global general manager at ABC Bullion, adding that the potential delay in a Sino-U.S. trade agreement is supporting gold and is expected to do so for some time.

· Fears of a possible global recession and economic slowdown has lent support to bullion. Data released on Tuesday showed that U.S. consumer confidence fell for a third straight month in October.

· Across the Atlantic, Britain is set to hold a December election after Prime Minister Boris Johnson won approval from parliament on Tuesday for an early ballot aimed at breaking the Brexit deadlock.

· Spot gold could test a support at $1,480 an ounce, with a good chance of breaking below this level and falling to the Oct. 1 low of $1,458.50, Reuters technical analyst Wang Tao said. 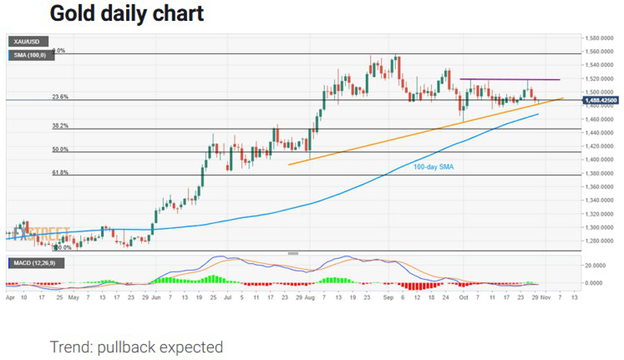 With the recent trade/political headlines renewing risk aversion, Gold prices take a U-turn from a three-month-old ascending support line while taking the bids to $1,489 amid Wednesday’s Asian session.

Considering the bullish signals from 12-bar Moving Average Convergence and Divergence (MACD) and the recent run for risk safety, gold is heading towards $1,500 round-figure prior to challenging a four-week long horizontal barrier, around $1,518/20.