· Gold prices dipped on Thursday as hopes for a thaw in the U.S.-China trade tensions lifted risk appetite, while some investors booked profits ahead of a meeting by the European Central Bank.

Gold quickly reversed an early Asian session dip and rallied back above the key $1500 psychological mark to hit three-day tops in the last hour.

It will now be interesting to see if the commodity is able to capitalize on the intraday up-move or meets with some fresh supply at higher levels as market participants start repositioning for the latest ECB monetary policy update. This will be followed by the release of US consumer inflation figures, which might further collaborate towards producing some meaningful trading opportunities on Thursday.

· The United States on Wednesday agreed to delay increasing tariffs on $250 billion worth of Chinese imports to Oct. 15 from Oct. 1 “as a gesture of good will”.

· Hopes of a breakthrough in negotiations between the world’s two biggest economies lifted risk sentiment, with MSCI’s broadest index of Asia-Pacific shares outside Japan up 0.2%, and the dollar at a six-week high against the safe-haven yen.

· The ECB meeting later in the session will be closely watched for clues on what measures the bank was willing to take to support a dampened economy amid Brexit concerns. The U.S. Federal Reserve is expected to do the same next week.

· “There seems to be no concrete plans yet (from the ECB). So investors are waiting and some of them are already starting to take profits. That’s why we don’t see (gold) prices fall much further,” Lan added.

The ECB is set to announces its rate decision at 1145 GMT on Thursday, followed by ECB President Mario Draghi’s news conference at 1230 GMT.

· Gold prices have dropped about 4% from a more than six-year high of $1,557 it hit on Sept. 4 as renewed risk appetite and improved economic data dampened demand for the safe-haven metal. These prices are highly sensitive to rising interest rates, which lift the opportunity cost of holding non-yielding bullion.

· Gold prices continue to hover near $1,500 an ounce. “It implies that there is still plenty of demand for the safe-haven asset on this dip in prices, which contrasts with the bullish euphoria elsewhere,” OANDA analyst Jeffrey Halley wrote in a note.

· Signals are mixed for spot gold, as it is stuck in a neutral range of $1,480-$1,497 per ounce, said Reuters technical analyst Wang Tao. 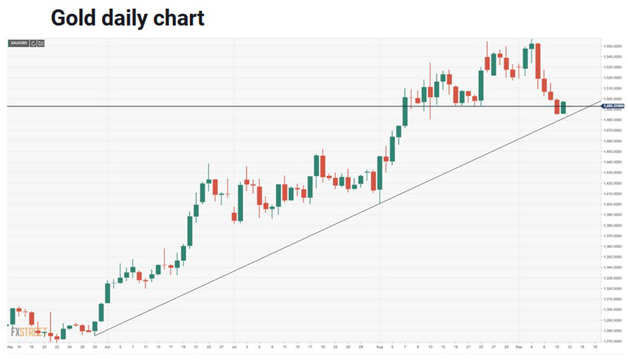 · Gold technical analysis: Bottoming below 1500s, bears look for a break of 1480

Gold remains heavy despite the bottoming signals below the 1,500s. The August support line has been broken but bears are not committing to short positions, likely as geopolitical uncertainties remain on the boil.

Gold is below the 21-day moving average, (bearish) while pressing on the 23.6% Fibonacci (Fibo) retracement of the July lows to recent swing highs. Below the trendline support, 1,478, as the 13 August volatility spike low, guards the 19 July swing highs that are located at 1,452.93. On the flipside, Bulls will need to get back above 1,550 which then guards prospects for 1,590 as the 127.2% Fibo target area.

· Palladium was on track for a fourth straight session of gains, while holding close to a two-month high of $1,590 it touched on Wednesday.