· Gold prices dropped for a fourth straight session on Tuesday as risk appetite remained buoyed by hopes for global stimulus and expectations of a possible thawing in the Sino-U.S. trade war.

“Globally we are seeing a shift back towards growth assets and that’s coming at the cost of the safe-havens,” said Michael McCarthy, chief market strategist at CMC Markets.

“A lot has already been factored in about the effect of the trade war on China. Better-than-expected numbers might suggest that the impact might not be as deep as many thought.”

· The trade war between China and the United States has upset markets globally since it began more than a year ago, fanning concerns of a global economic slowdown.

However, markets took heart from their decision to hold talks in early October in Washington.

· Meanwhile, U.S. Treasury Secretary Steven Mnuchin said on Monday he did not see the threat of a recession as President Donald Trump seeks to revive trade negotiations, adding that he expected a positive year ahead for the U.S. economy.

· Investors now await the European Central Bank’s meeting on Thursday for clues on monetary policy easing. The ECB is all but certain to introduce a package of monetary easing and stimulus measures, but markets doubt it will opt for a massive quantitative easing.

· “A resumption in U.S.-China trade talks along with accommodative monetary policy by global central banks has renewed risk appetite for the current term,” Phillip Futures said in a note. · Meanwhile, holdings of SPDR Gold Trust, the world’s largest gold-backed exchange-traded fund, fell 0.82% to 882.42 tonnes on Monday. 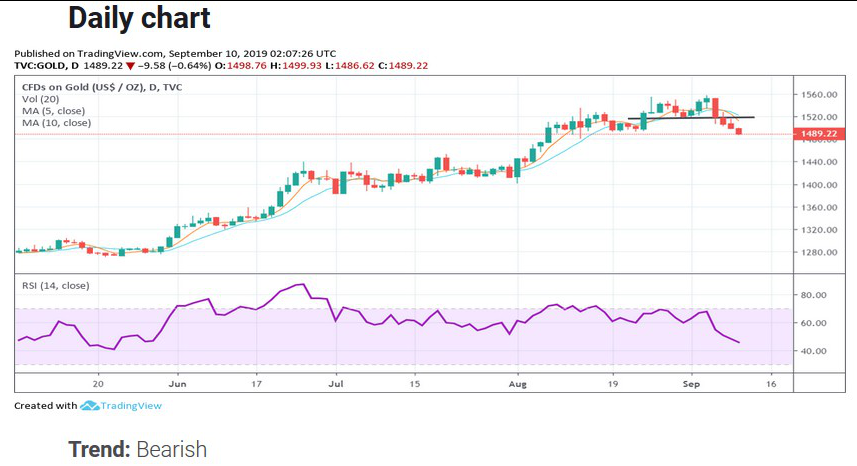 The slide to one-month low has strengthened the bearish bias put forward by the daily chart double top breakdown confirmed on Thursday and the weekly chart bearish engulfing pattern.

Also, the relative strength index (RSI) is now reporting bearish conditions with a below-50 print. The indicator has turned bearish for the first time since May.

The 5- and 10-day moving averages (MAs) are also trending south, indicating a bearish setup. All-in-all, the yellow metal risks falling to the 50-day MA, currently at $1,469.

A minor bounce may precede a drop to $1,469, as the intraday charts are reporting oversold conditions.