· Gold prices edged higher on Monday as expectations of monetary policy easing by major central banks gathered momentum amid soft economic data, although an uptick in equities limited gains in the precious metal.

“We are seeing short-term weakness (in gold prices), but in the long term the trajectory is still bullish.”

· Global equity markets received a lift after China’s central bank said on Friday it was reducing how much cash banks must hold in reserve, releasing liquidity to shore up an economy slowed by the Sino-U.S. trade conflict.

· Meanwhile, data on Sunday showed China’s exports unexpectedly fell in August as shipments to the United States plummeted, pointing to further weakness in the world’s second-biggest economy and underlining the need for more stimulus.

· Risk sentiment was also supported by comments from Federal Reserve Chair Jerome Powell that the U.S. central bank would continue to act “as appropriate” to sustain the economic expansion.

Powell’s comments and a mixed U.S. employment report firmed market expectations that the Fed would cut interest rates at its meeting later this month.

· “Central banks across the globe look set to remain on a dovish path as the global economy slows, pushing bond yields lower, which helps to support the precious metal... This dynamic is further exacerbated by rising fears of recession,” Fitch Solutions said in a note.

· Hedge funds and money managers upped their bullish positions in COMEX gold and silver contracts in the week to Sept. 3, the U.S. Commodity Futures Trading Commission (CFTC) said on Friday.

Spot gold is expected to test a support at $1,497 per ounce, a break below which could cause a further fall to $1,453, according to Reuters technical analyst Wang Tao. 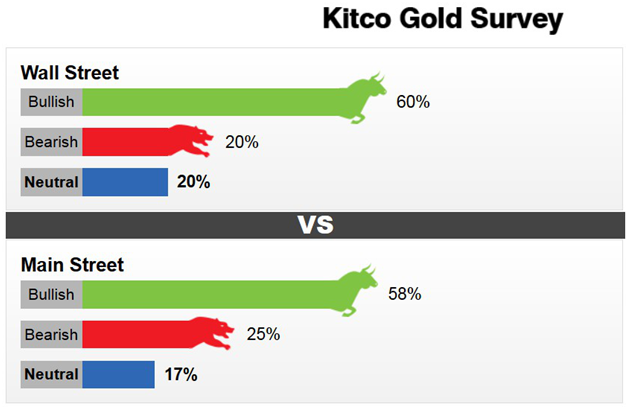 · The gold market has run too low too fast, bringing bullish Wall Street analysts back into the marketplace according to the latest results from the Kitco News Weekly Gold Survey.

“The market doesn’t look great right now but I got to stay bullish because there is still so much news still to come out,” said Kevin Grady, president of Phoenix Futures and Options. “Central banks are still going to cut rates and that is good for gold.”

The gold market was facing its second negative weekly close but has managed to bounce back Friday into neutral territory after economic data showed that the U.S. economy created fewer jobs than expected in August.

Although there is some caution among Wall Street analysts, sentiment remains positive as the market has held critical support above $1,500 an ounce.

Adam Button, managing director at Forexlive.com said that the drop in gold was an important test for the market but he added that he expects dips will be bought.

“The slump this week was overdone. Retail and fund manager enthusiasm continues to grow for gold,” he said.

Richard Baker, editor of the Eureka Miner Report note that even after gold’s drop mid-week, Friday’s recovery shows that safe-haven demand is still alive and well because of geopolitical and global trade issues.

“I believe gold will receive a further boost as the Brexit situation continues to deteriorate in the U.K. under Boris Johnson,” he said. It is likely that Comex gold will find comfort at the $1,540-level next.”

“Physical gold is the way to go, in my view, because of the incredible increase in money supply,” said Mobius, the founding partner of Mobius Capital Partners.

“All the central banks are trying to get interest rates down, they are pumping money into the system. Then, you have all of the cryptocurrencies coming in, so nobody really knows how much currency is out there,” he told CNBC’s “Street Signs” on Friday.

Mobius recommends that investors hold 10% of their portfolios in physical gold, with the rest invested in dividend yielding equities. That’s especially if the dollar gets weaker.

In his view, “the U.S. government, the Trump White House, does not want a strong dollar.”

“They are certainly going to try to weaken the dollar against other currencies and of course, it’s a race to the bottom. Because, as soon as they do that, other currencies will also weaken,” said Mobius.

“People are going to finally realize that you got to have gold, because all the currencies will be losing value,” he added.