· Gold prices fell on Tuesday on the back of a firmer dollar, but fears of a global economic slowdown fueled by an intensifying U.S.-China trade war kept prices near multi-year highs.

· The stronger dollar is weighing on gold prices, Phillip Futures analyst Benjamin Lu said, adding that investors are waiting on the U.S. manufacturing survey by the Institute for Supply Management (ISM) for some forward guidance on U.S. economic conditions.

“Better than expected ISM result can give some weakness to gold prices on an intraday basis,” Lu said.

· The dollar index, which measures the greenback against a basket of six major currencies, was up 0.4%, having climbed to a more than two-year high.

· China has lodged a complaint against the United States at the World Trade Organization over U.S. import duties, trashing the latest tariff actions as violating the consensus reached by leaders of China and the United States in a meeting in Osaka.

A new round of tit-for-tat tariffs came in effect on Sunday and although U.S. President Donald Trump has said both sides would still meet for talks later this month, tensions have shown little sign of abating.

· Also keeping investors on edge were uncertainties over Brexit with Prime Minister Boris Johnson indicating he could call an election to block lawmakers’ efforts to avert a no-deal Brexit.

· Gold rose more than $100, or about 7%, in August due to the trade war, fears of a global economic downturn, negative debt yields around the globe and hopes for interest rate cuts by central banks.

· Gold bulls hold the fort in a critical support area in the $1,520s

Gold prices were elevated overnight but have fallen back a touch in early Asia in thin trading conditions as we await further evidence that the trade talks between the US and Sino are on track for this month and what immediate Brexit developments will unfold for the rest of this week. Gold is currently trading at $1,526.10, having travelled between a range of between $1,525.79 and $1,529.88. 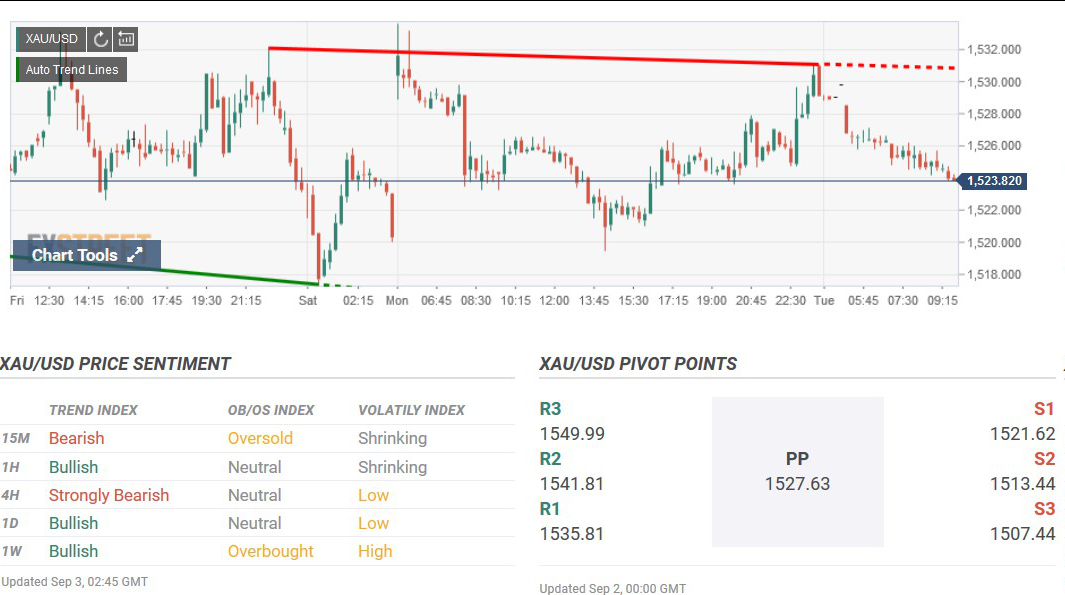